The Iron County Republican Party welcomed over 150 friends, candidates, challengers and elected officials to their Lincoln Day Luncheon at the Gilbert Great Hall in the Hunter Conference Center at SUU on Saturday.

The major fund-raising event for the Iron County Republican Party featured the major themes of the GOP platform: limited government and the fight against government encroachment on our personal liberty and public land, the right to life, the right to protect your own life and home, your property, protecting the lives of unborn children, and lower taxes.

Brie Wall, President of the SUU Republicans played an important role in arranging for the venue, and she offered the opening prayer. The program was sponsored by GO Green.

After Chenille Sheeran sang our National Anthem, the audience all sang “Happy Birthday” to Abraham Lincoln to honor his birth on this day.

The Iron County GOP expresses appreciation to all that participated in this fun event.

SCC Report. Future meetings will be 4 hours. Decided to have State Delegate training before State Conventions. This is to help remove confusion for delegates. 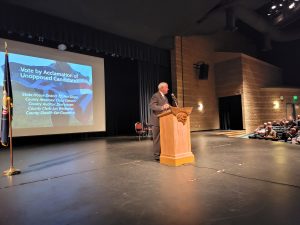